The soldiers cried out to be ambushed by the terrorists of Boko Haram while they screamed, "Buratai e no go better for you."
The Newsroom ⚫ 21st May, 2020
185

Nigerian Soldiers ambushed by Boko-Haram cries, rain curses on Buratai (Video)
A video has surfaced on the internet, showing three Nigerian soldiers crying, raining curses on Tukur Yusuf Buratai, the Chief of Army Staff after they were ambushed by terrorists from Boko Haram.

The soldiers cried out to be ambushed by the terrorists of Boko Haram while they screamed, "Buratai e no go better for you."

Nigerian Soldiers Cries Out After They Were Ambushed By Boko-Haram Terrorists.

These Soldiers Rain Curses On The Chief Of Army Staff Buratai For Setting Them Up As Boko-Haram Terrorists Attacked Them. @HQNigerianArmy#TheZooCalledNigeria #BiafraExit #BiafraReferendum 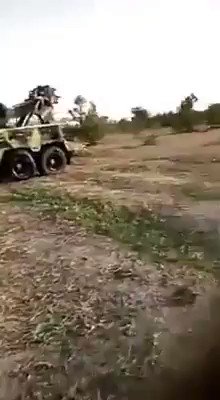 142 people are talking about this
The Nigerian Army's pains, tears and sufferings are rarely seen in fighting a war against the Boko Haram terrorists and this is yet another heartbreaking moment captured on video that has brought many to celebrate the heroes, the soldiers.

Nigerians joined the soldiers in calling out Buratai as the video is going viral.

See some reactions to the video below.

They should all resign is dat simple dis is suicide mission, So sad – @Samseg7

Boko Haram: Buratai has turned our military men to Human Shields. This is the consequence of choosing emotions over reasons. Buhari your Mai Gaskiya no send una. – @ayemojubar

The soldier insulting Buratai and the Army knows he’s going to be court-martialed but he still did it. How can we fail our troops like this and we have a retired General in the villa who boasted he will defeat Boko Haram in 2015. – @adeyanjudeji

The worst part of it.
They assigned all the young soldiers from the East, West and South to the North to suffer And the northern soldiers to the above zones to enjoy. Wicked Leaders. – @akoro_mark

Having planned out a course of action for full blown attacks, then someone divulged everything to Boko Haram making it easy for them to ambush and kill the soldiers. A civilian can never understand their pains – @Deji_OoniAbj

An Eyewitness?
Get paid when We Recieve your Exclusive Reports with Facts/Evidence attached
Submit your Features/Opinions/Stories now via WhatsApp Only:
+2348051600130 facts@thegazette.ng